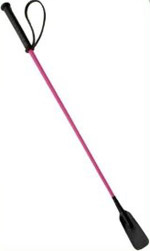 Despite the heart-warming resurrection of  Kauto Star, it’s hardly been a great week for British Racing. We’ve had corruption cases; a £3000+ fine levied on Kieren Fallon for “misleading” that most mild and scholarly Stipendiary Steward William Nunneley; and the overturning of a conviction against BHA’s tame QC-cum-trainer Graeme McPherson (for “schooling” a horse in a race at Chepstow) after a hearing lasting, reputedly, around 90 seconds. The Whip Debate of course rumbles on, with another slew of jockey bans on the Flat and over Jumps. At least one of them (Sophie Doyle‘s) was a 10 day ban for a “second offence” in marginally exceeding the number of taps available to her under the new “excessive frequency” rule. On the Flat the BHA’s randomly plucked number is seven, with one more allowed over Jumps. Another such minor infringement, and she might as well call it a day for her career this winter.

Can anyone seriously maintain that these daft punishments fit the (alleged) crime? Or that there is any scientific basis for claiming that seven strikes with the glorified feather duster jockeys use these days – devised with the active input of the RSPCA, by the way – is good, whilst eight strikes are bad? As the astute James Willoughby said on Racing UK, “we’ve no option but to keep banging the drum”, even at the risk of boring less unquiet spirits to distraction. Because until this miserly stroke-counting is ditched, there is no chance of these whip rules attracting anything other than the media opprobrium which they were allegedly framed to reduce. We’ll see what new CEO Paul Bittar might or might not do to redress this evil in January. Watch this space…

Meanwhile at BHA’s High Holborn HQ the first significant head has rolled in the wake of the whip fiasco. The popular, helpful and generally open Head of Communications Paul Struthers left his post last Friday (November 18) amidst rumours that he was the victim of a “whispering campaign”.  Whatever the reasons, it seems only too typical of the current administration that competence is treated as a sackable offence. Paul hopes to continue working in Racing, but meanwhile has more time to spend with his young family. Good luck to this talented communicator.

As a minor piece of collateral damage to this, the weekend also saw the forced ejection of yours truly Pinza from that hallowed hall of equine debate The Racing Forum. Yet though a thread on Mr Struthers’ departure was the ironic catalyst for my own sorry demise, the roots of the rumpus lay in the grief I’ve been giving to the Forum’s owner, the affable David Cormack, since the BHA Whip Review appeared at the end of September.

David believes the whip should be banned, except for safety purposes (whatever those are supposed to be) and his tolerance for those of us of a contrary opinion has worn thin, finally to breaking point. I’ve no beef with his decision: it’s his Forum. He puts in the work. So if thorns in his side are causing him heightened blood pressure and sleepless nights he’s quite within his rights to extract them. If he thinks I’m a devil, then he has every right to invite me to spend more time with my familiar.

I have to say that being flung into the Lower Depths is an experience both new and strange. Like many people in my neck of the woods part of my business in life is (in no particular order) to inform, entertain and challenge received wisdom. I love ideas. I love words and music, and enjoy analysing both. Some people find this as uncomfortable, and unsettling as they find any sort of self-analysis. We’re all different. It’s true that once I’ve got the bit between my teeth my enthusiasm knows no bounds, and in this case a moderate moderator has decided it’s not in the interest of his Fiefdom to give Pinza a platform. Thus this blog.

There’s a haunting scene in Dickens’ Christmas Carol where that good man Ebeneezer Scrooge is shown his own funeral by the Spirit of Christmas Yet to Come. He witnesses old fishwives fighting over his possessions, his coffin thrown into a pauper’s grave, and hears at last what people really thought of him whilst he lived – and of course as he’s dead, there is no comeback (in any sense). The last couple of days I’ve had a curiously similar experience, reading on the “Pinza” thread of the Racing Forum (64 posts and counting) exactly what many kind souls thought of me, quite without any right of reply.

Most of these opinions, pro or con, held little surprise. My good friend Drone encapsulated me nicely, I thought: “erudite, articulate, polymathematic, passionate, provocative, confrontational, amusing, annoying, argumentative, confident and comfortable residing just inside his own rectum”. I blush. Others took a contrary view: the well-named Marginal Value said that “Pinza had verbal skills aplenty, but he also had an ego that forced him to abandon debate in favour of winning.” Such statements reflect how the speaker sees things himself: as a committed Empsonian I must tell him that I rather see life in shades of grey, not black and white. I’m much more interested in urging fellow enthusiasts to analyse what they are saying, in questioning them and defining terms rather than “winning” anything. That’s not how debate works.

The tone has now changed from polite Obituary to impolite Estuary, rather as if the remaining mourners were getting drunk at the wake. The pithy sketch of “The pillock that is Pinza” by Deep Sensation gave me most fun. I can’t remember what I did to offend this worthy; but his level of sophistication indicates I was arguing with a horse rather than a human being. He finished with a flourish: “Does anyone know who this pathetic loser is?” Well now you do, old chap. As Burns puts it, “O wad some Power the giftie gie us…” I’ve had the instructive gift of learning how about 50 assorted men and women saw me, for which I thank them.

Enough of all that. I’ll be using this space to put forward occasional thoughts on Racing and (I can but hope) continuing to inform, entertain and occasionally needle people as best as Pinza‘s poor gifts allow – whether on The Whip, the BHA, Racing for Change, the RSPCA… but hush, it’s time for me to marinade my quails for tonight’s modest repast.

31 thoughts on “Reading your own obits.”