So poor Chaninbar is now Chaninbarred. I know the feeling, old fella. Perhaps you too could start a blog (“a passion for not racing”?) … meanwhile the “Pinza” thread on The Racing Forum has been moved to the Lounge but has reached a giddy count of 139 posts. One recent entry (from the admirably salty Ugly Mare, a favourite poster of mine) focuses on one of Pinza’s bolder and clumsier attempts at humour, in which I cast myself as an elitist snob in order to send up the Old Buffer mentality which once thrived in racing, but which now scarcely (alas, alack) exists at all.

Of course I’m an elitist – isn’t everyone who wants the best horse to win a Group 1 at level weights? – but a snob?? Never, madam! Let me tell you that I know my hawks from my handsaws, and my Chassagne-Montrachet from my Scunthorpe Riesling.

Doubtless L’Affaire Pinza will be ancient history by Saturday and the 55th running of the Hennessy Gold Cup, the race which now (since the demise and consequent decline of the Whitbread at Sandown) can boast the longest span of single commercial sponsorship in British (and world?) Racing. Its distinguished history needs no plug from me. The only three horses to win it twice have been Mandarin, Arkle and Denman. The latter two need no plugging either, but younger fans may need to be reminded about Mandarin, who won the inaugural running of the race (at Cheltenham) in 1957, and repeated the feat as a 10 year old in 1961, by which time the race had moved to its present home of Newbury. 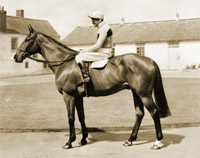 Mandarin, a diminutive bay foaled in 1951, was owned by Peggy Hennessy (founder of the race itself) and trained by Fulke Walwyn. He was one of the best and most popular battlers of his day: Mark Johnson’s motto of “Always Trying” could have been invented for him. He won two King George VI Chases, in 1957 and 1959, as well as those two Hennessys, but fell twice when trying at short odds to add the Cheltenham Gold Cup to his trophy cabinet, and even broke a stifle bone. As with Desert Orchid, the course never really played to his strengths, and patched-up in 1961 he got round but failed to get up the hill, finishing third to Saffron Tartan.

By 1962 the little horse was an 11 year old, and getting on a bit. More or less crocked, fired and sliding down the handicap (gifts presented to most of us in late middle age) he was nevertheless nursed home up the hill by his great jockey Fred Winter to finally bag that elusive Cheltenham success. That, we’d think, might have been that. Doubtless there were plenty of people keen to offer Walwyn precisely that advice. Nowadays they tweet Paul Nicholls about his old crocks instead. 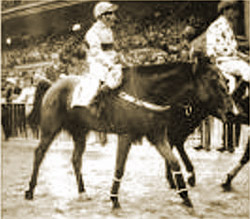 Exhausted horse and rider after their legendary Auteuil triumph (1962)

But Mme. Hennessy had other ideas. She was keen to achieve a unique double by winning the Gold Cup and the Grand Steeple-Chase de Paris at Auteuil in the same year. The heroic story of that event, in which Winter rode the race of his life to get Mandarin home with a broken bit, no reins and a bowed tendon – has been told often and gloriously – never better than by John Lawrence (aka Lord Oaksey) whose next day report for the Daily Telegraph was one of the finest pieces of racing journalism ever written and remains a must-read for anyone who cares about the Sport. Sadly the Noble Lord’s piece is no longer to be read for free online, though you can buy a generous compilation of his best journalism cheaply enough here.  The estimable Sean Magee included it in his 10 Greatest Races of all time, a fitting tribute to a great race, and a greater horse.

I owe Mandarin a debt too: he was the first love of my racing life and remains the purest. After the Gold Cup I scrawled high-quality frescoes all over my bedroom wall. Sad to say, these have not been preserved for posterity. Even more sadly Newbury, serial snubbers of their own great races, saw fit some years ago to degrade the Mandarin Chase – once a highlight of the Yuletide programme – to a common or garden Class 3 handicap; though last year it was run as a more compelling Graduation Chase so things are looking up slightly. Auteuil run the important Prix Mandarin (September) in his memory. An equine prophet without honour indeed…

Meanwhile, whilst cheering home Wayward Prince on Saturday, spare a thought for valiant old Mandarin. There’s not even a Wiki entry for him as yet, so I hope somebody reading this might be inspired to do the pint-sized bruiser that honour. Goodness knows he deserves it.

12 thoughts on “Non-trier, and an Old Trier”